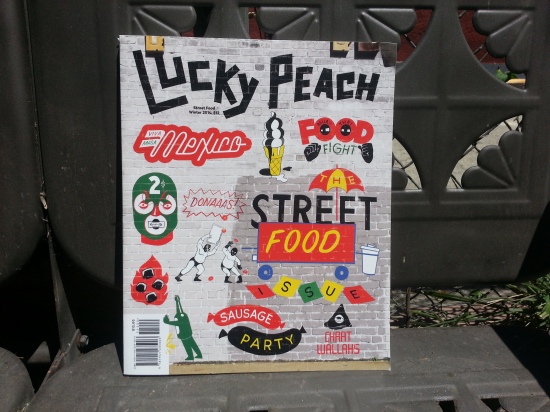 I have to apologize again. I’ve been traveling a lot on RATDOG tour this year and though it’s involved some fantastic eating adventures (try Jack Stark BBQ in Kansas City, MO or the Blue Ribbon fried chicken at the Brooklyn Bowl) in between the shredding Americana mind blowing psychedelic rock ‘n’ roll of Bob Weir and company, that’s not what I’m here to write about. I’m here to confess I haven’t cooked anything out of the last three issues…but I’m back for a month to patch my bones so I will be featuring a few recipes soon.

In the meantime, I leave you with these great covers from the past two issues, Winter 2014 Issue #10, STREET FOOD and Spring 2014 Issue #11, ALL YOU CAN EAT. They’re both rad and though I love a good drunken trip to the buffet in Vegas at 5am, I think I love Street Food more. Here in Los Angeles, the last, say, 7 years, I have seen the food truck trend start, soar, and overwhelm the Angelenos. My fave is still the Kogi truck but the Sushi Pirates live on my block, so I’ll give them a shout out too. There’s some fascinating stuff in the Street Food issue, lots of tips for real intrepid travelers who might be into some crazy Thai hot dog specialities. I’m gonna attempt the wiener blossoms fo sho.

On August 19th, Issue #12 comes out, and word on the summer streets is it will feature barbecued hagfish, Portuguese clams, oysters blended into mayo, and more. So, be on the lookout!!  I’ll be back. Keep in touch.