Something amazing happened. I cooked a Lucky Peach breakfast in my Mom’s kitchen. Yes, I’m still homeless but her guest room has been mighty comfy lately. After a short gig at Kitchen Mouse in Highland Park (my first ever real restaurant experience, and it was lovely, the peeps there are all fantastic), I have taken up copywriting at an ad agency while burning the midnight oil on my own work (forever). Recently, my friend Bobbo visited from Cordova, Alaska where he’s a forest ranger in the Chugash. He interrupted all my shit and so I decided on his way out we’d have some cocktails while I cooked a warm meal for him and a few other friends. So, here are Brooklyn chef Stephen Tanner’s Bologna Cups, aka the Albany Cafeteria Breakfast. From what I gather from his photos in the LP article, we’d get along fine – smoking and southern boys are right up my alley.

AND I hustled my friend/rad photographer Micah Slay to shoot the pics and drink with us. 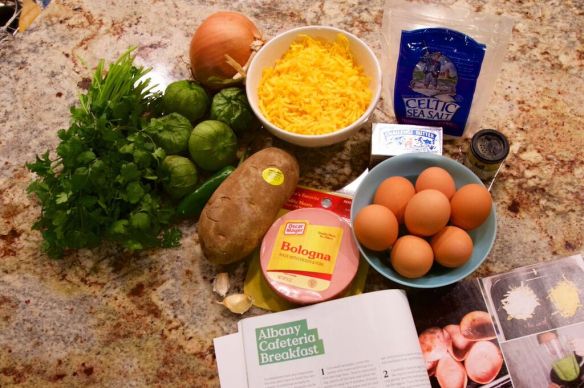 Don’t let this breakfast fool you, it’s a juggling act and after I got through my first Capt & Coke, I whipped my crew into shape and put them to work. The bologna cups are easy to make, but I recommend you do them at the end actually, since they take seconds to curl up in a hot saute pan and you want to serve them caliente. By the way, I learned that in L.A. it’s not so common to get bologna sliced at the deli. I witnessed it in some shitty part of Massachusetts with an ex-biker boyfriend I had and thought they did it everywhere, but not so much. Oscar Meyer still rules most deli meat aisles (probably ’cause this stuff is nuclear), but there are many varieties to choose from. I chose the pork & chicken combo over the beef, because after all, bologna is really Italian mortadella sausage. It’s actually a much fancier breakfast than you thought.

It’s the hash browns and salsa verde that take real prep and patience. So, just get right into that. Boil the potato for 9 min, grate it, and then form little piles on a griddle. Put 2 T butter (YEP) on top of each pile on med heat, and let the butter melt all the way through that puppy and then flip it. Add cheddar on top and dream. Tanner reveals that this is his infiltration of the Waffle House hash browns, and holy fuck, he’s got that right. 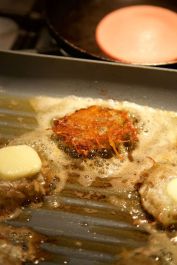 In the meantime, get someone to make you a drink and then get on the salsa verde. It’s nt the season here in L.A. but since there’s so many Mexicans, you can’t sneeze without finding tomatillos and jalapenos in stores still. Boil the jalapeno for 1 min, then add the tomatillos and turn off the flame. Let them cool, then drain.

Add them to a blender with chopped onion, garlic, cilantro, and salt. I say add as much as you like of all those things, taste it and make it exactly how you like, everyone is different on their salsa code. 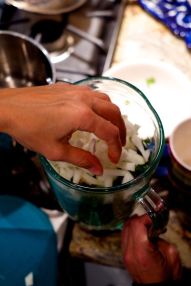 The real trick is once you have a buzz, make sure someone else wants to do the poached eggs because they take up most of your attention. Tanner gave us a fancy scientific prop instruction involving a cup. The homie Chris was on it, and a 3 min poach was perfect. 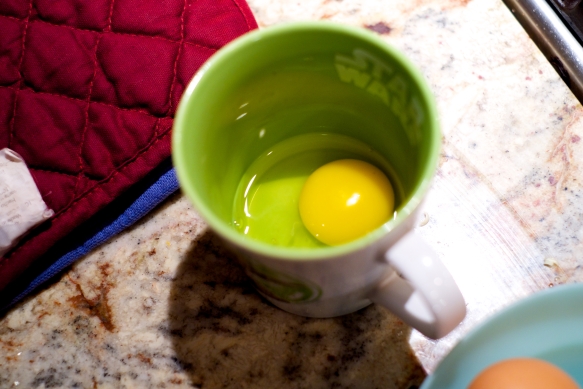 Get that slice of bologna hot and curled into a cup and add the cheddar hash browns first, then the poached egg, and top with your salsa verde. 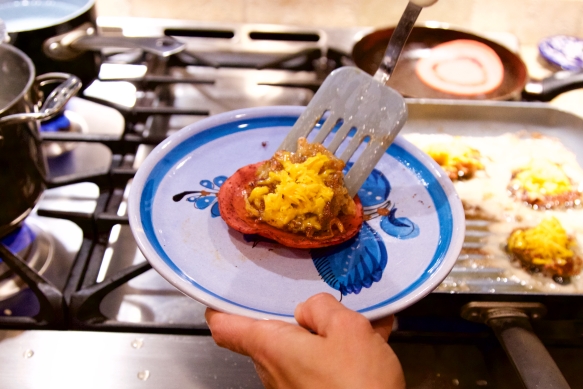 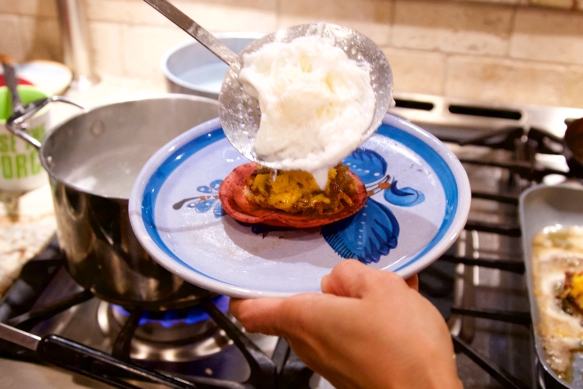 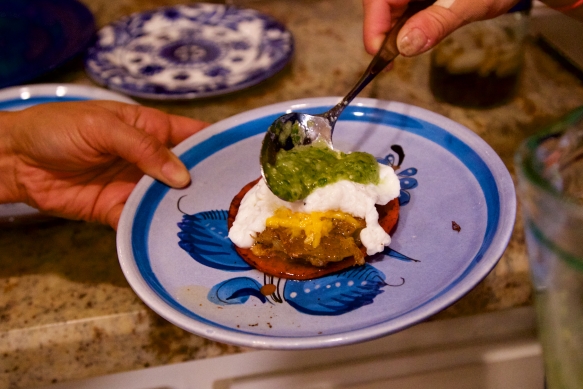 That my friend, is da bomb diggity. Super tasty and pairs wonderfully with Capt. Morgan’s and Coke – and a visit from Ranger Bob.